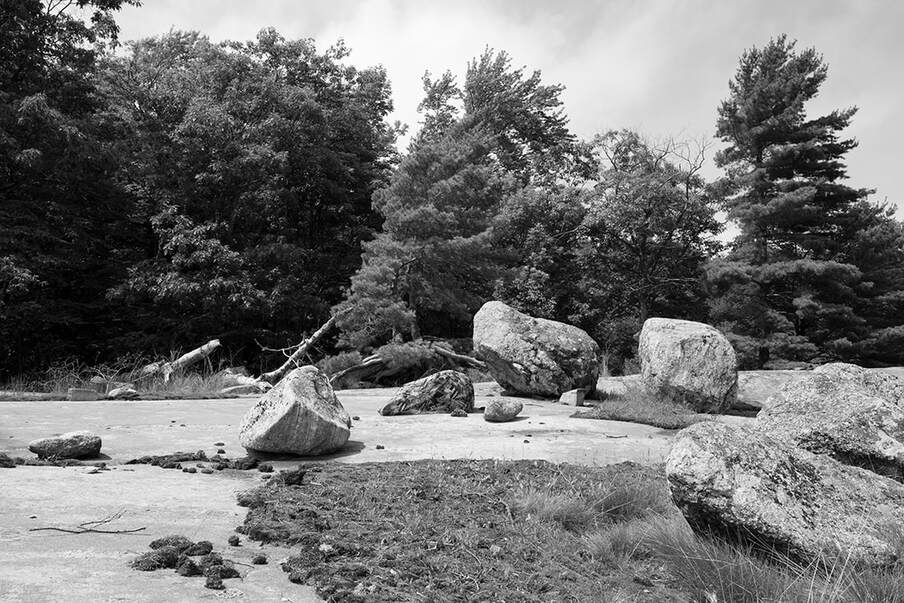 A Girl from Parry Sound:
Past, Present and An Unforeseeable Future

​I don’t need anyone or anything in this moment, just the sun, the water, the breeze and this warm stone beneath me. At ten years old I already understand the sufficiency of mind, body and nature and don’t know yet just how deeply this landscape will imprint me for life. This is part of my daily ritual over the months of July and August while we live at our family cottage on Georgian Bay. I make my way across a small bay to a vast low smooth expanse of shoreline granite, half walking and half swimming in the waist high water. It is my daily sojourn to visit a magical spot to watch the pollywogs in the water-filled crevices of the stone and marvel at the appearance of legs where previously there was just a tail. Later I meander further and re-enter the water. Descending slowly my feet cross a darkened stripe embedded in the massive igneous rock, a scar from the colossal Imperial Oil storage tank spill in September 1950 that released over 8 million litres of black bunker oil into Parry Sound Harbour and beyond. As the ribbon passes under my feet I drift into a mysterious reverie. I can feel the slime under my feet as I advance downward in a slow slippery slide. My body is swallowed whole. I am floating, no, the world is floating, and I am but a floating speck amongst innumerable other floating specks suspended above a grave of black slick buried just a few feet below.

I am lying down again, the shedding water from my limbs, hair and bathing suit manifesting beneath me a matching shape to my small body as I wait for the sun to dry me. I can feel the tug on the erect hairs on my arms as they are buffeted by the breeze. I can’t quite see her from here, but I know Mom is washing sheets at the shore with a bright yellow bar of sunlight soap. My older brother and sister are probably nearby fishing from the grey punt while my younger brother occupies himself for long periods trailing his toy, a treasured wooden flat-bottomed boat made by my father from a spare piece of lumber. It follows my brother by the string attached to its bow leading up to a stick in his hand, pulled just fast enough in the low chop to create a wake.

In just eight years I will be married.

© 2021 Frances Thomas
No materials from this website shall be used for any purposes whatsoever without the express permission of Frances Thomas.